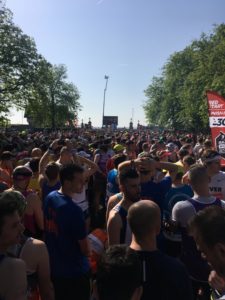 I got away well and unlike last year I had plenty of room around me to get into my stride. I had read somewhere that smiling whilst running improved performance, worth a try I thought. I felt awesome, my niggling knee, tight calf and ankle injures were under control and I was having a fantastic time high fiving spectators and smiling my way round. Even my biggest fear, the temperature, was manageable.
At mile five I saw another Cardiac Risk in the Young (CRY) runner ahead on me. As I ran alongside Matt, we chatted about our reasons to run. His son had died just over five years ago from an undiagnosed heart condition. This was Matt’s fifth successive London Marathon and he had raised a phenomenal amount of awareness and funded hundreds of screenings. He was truly inspirational and I wish I could have chatted for longer, but he said I was going too quick for him, so as we rounded Cutty Sark we wished each other luck and parted company.
I knew that some Team Ben Hammond supporters were going to be situated around the mile seven marker. Sure enough there they were. I spotted their green t-shirts before they spotted me! Big cheers and high fives all round to Nick, Claire, Ruby and Nell Vincent. Seeing friends on course always gives me a massive boost and their contribution is of huge importance to me and always very welcome.

Around the mile nine mark I became more aware of the temperature. I was hot and getting hotter! Thus far my strategy to stay cool had been to take a water bottle at each water point then proceed to drink half and pour the other half over my head! From the next water stop until the end I took two bottles, drank one and poured one over different parts of me! The relief was instant but short lived!

Crossing Tower Bridge stirs your soul and reminds you why so many people run this crazy race. The cauldron of noise gave me such a buzz. This year I knew my family and other TBH supporters were just the other side of it. They spotted me before i saw them. To hear and see them again gave me an instant boost which by this point was well needed. Thanks to both mine and the Farmer family for your terrific support!

So I had reached half way feeling relatively good, my pace was good and I was just about managing the heat, I was still just about even managing to smile. However, things were about to change. As I ran around the corner away just after the fourteen mile marker my right calf muscle suddenly twitched and then cramped up solid. The pain was immediate and debilitating. I stopped and attempted to stretch and massage it but to no avail. Even walking was painful. I walked for a while until I came across a St Johns Ambulance tent. I went in and told them what had happened. The chap that inflicted the most painful massage in the history of massages name was Steve. Now, Steve said he was sorry for inflicting such torture and I’m sure he was, but the pain was excruciating. After what seemed to be an eternity the muscle in my leg eased up and was less ‘solid’. ‘See how you get on,’ Steve said, ‘Take it easy, walk if you have to; you might struggle to get to the end.’ These were not the words I wanted to hear. I had trained hard for this day and was well on course to reach my goal. I walked away and considered my opinions. There was no way I wasn’t going to finish, that was for certain.
I adopted a run walk strategy for the remaining twelve miles. My goal was now to finish, I quickly realized that my finishing time was of no importance. The Isle of Dogs is the least supported part of the course, there are parts where there is no crowd. During these miles I thought often of both Ben and my Mum! They were who was inspiring me to continue.

By mile eighteen I began to run more than walk, no great pace mind you but at least I was running. I felt certain I could finish if I continued at the reduced speed. I knew my supporters were coming up again around miles twenty four and twenty five. I couldn’t let them see me walking and feel my pain so I plodded painfully onwards. By now the the smile had gone long gone!

I reached the embankment and in quick succession saw several runners suffering from heat exhaustion, oxygen masks on and ice on there body’s in an effort to cool them. It was really quite disconcerting to see. It’s then that I realized that perhaps my injury at mile fourteen had saved me from this, by going slower the heat had not been too much of a problem. Who knows?

Running the final miles is awesome, and seeing friends and family is in my opinion essential. When I saw Team Ben Hammond supporters again I didn’t see my wife at first and had to double back to hug her. My legs nearly buckled as I got to her. It was tough now, it wasn’t only my calf now, both my l legs felt like jelly. One last push I thought. Make Ben Proud, Make Mum Proud was my mantra. I repeated it out loud to stay focused for the final couple of miles.
About a mile from the finish I spotted another CRY running in the distance. My next target was to catch him. I caught up with him in the nick of time as we held hands and crossed the finish line together. It seemed like the right thing to do, and he seemed to like the idea!
I was ecstatic to finish, and this time round I did not care that I hadn’t ran it in the time I was aiming for. It didn’t matter. I felt proud of what I had achieved, proud of the other CRY runners, proud of Sheralyn, Steve and Archie, proud of Team Ben Hammond and proud of Ben. It was an honour and privilege to run in his memory. 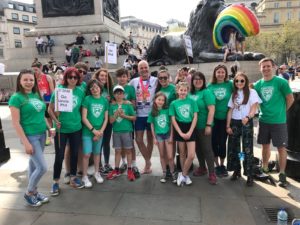 A huge thank you to everyone who came along and supported me on the day and to all those who donated. It means so much to me and you’ll never know how grateful I am to see your smiling encouraging faces!
Same time next year? You’d better believe it!
Phil